This is a copy of the HOWTO on ComputerChristmas.com authored by Sean Bowf, reproduced with permission.

The usual disclaimer... If you use any of the information I provide here, you do so at your own risk. Its application and use are 100% your liability. Please see the ChristmasWiki Disclaimers as well.

I have built this layout and have all 64 LEDs blinking so it has been tested.

This how to is just as much about supplying resources (parts list, PCB layout, links, etc) as it is about how to put the controller together.

The first thing I am going to talk about is making the PCB. To get to the the web site I used that showed how to etch the PCB, click here. The only thing I would like to add to his instructions is that I believe that the "touch up" phase of the process (after ironing the print onto the blank PCB) is understated in all the instructions I have found on line. I use a bottle of finger nail polish and a toothpick to touch up ANY place that I think MIGHT be a problem. Looking over the PCB and touching it up takes me 5 to 10 minutes, depending on the quality of the transfer. If the transfer is bad, I clean the transfer off the blank PCB with Acetone and start over.

I laid out the traces on my PCB using software called expressPCB. The software is free. To download the software go to this website, click here . A note about the software, the board you make has to be able to be printed on a sheet of paper. If is is larger (in any direction) the software will reduce the size of the layout when you print. You can get past this "feature" of the software by printing a wide PCB landscaped (as opposed to portrait), so it all fits on a single page.

After I made my PCB layout, I downloaded some software called primoPDF. This software installs a fake printer on the computer. When you print the PCB traces from expressPCB to the fake printer, it creates a PDF file.

To view/download my PCB trace file, click here (you can download it by right clicking the link, and selecting "save target as"). Express PCB says the board is 6.2 by 4.4 inches. I have been putting them on a board that is 7 by 4.5 inches.

I put two copies of the circuit board on the page to keep from wasting photo paper/tranparency film. Just print them from a laser printer onto inkjet photo paper, or inkjet transparency film, then cut them out of the page and iron them on.

Step 2 : About the layout

The layout is designed for single sided PCB etching. A picture of the layout is below. Any place you see a red trace (top trace), install a jumper wire across the top of the board.

There are two pads in the upper left of the layout near the output jack. If you are going to run 5V from this controller to the next through the CAT5 cable, install a jumper wire between these two pads. If not, leave them alone. I ordered a 2 pin jumper that I will install here. It is part of my parts list (later). A jumper wire could be used just as easily.

The LEDs are optional. The board will run with or without them. If you don't install the LEDs, the SIPs are not needed either. 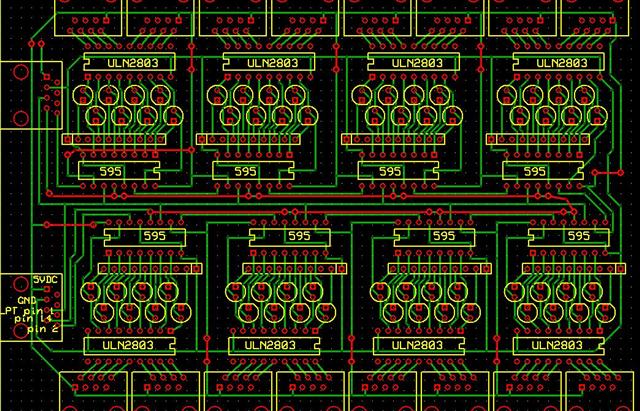 I use a drill press that I picked up on sale at harbor freight for $40. Not the best of quality but it works.

I place a block of wood under the PCB and drill the board moving it from hole to hole.

I created a parts list in excel with links to mouser for my PCB. The costs were accurate as of 23 January 2006. To see the parts list, click here. They were out of the LEDs on the list when I ordered, so I ordered a different one with the same specs (2 volt, 10mA, T1).

A little note about LEDs. The T1 LED component in expressPCB software is actually larger than a T1. It is about the size of a T1.75 LED. I have made a PCB with this layout using T1.75 LEDs and they fit. As to the part numbers for LEDs. I have tried about three different part numbers with resistors as high as 750 ohms with decent results. Here are the mouser part numbers for the LEDs I have tried:

- 604-WP7104IT This is probably the best one I have found, but it is also the most expensive. It is a red LED that is listed as "high efficiency." I have been paying 13 cents each for them in quantities of 100.

- 638-264-7GT This is a green LED. Like the previous LED, it is not diffused (just a transparent lense). These are only 8 cents each when ordered in quantities of 100.

- I have ordered two different lots of LEDs off E-bay. One was very dim. Luckily it was not as advertised, so I was able to get a full refund on it (wrong size). The other lot worked well, but seems to include a couple different models in the same bag of LEDs. All in all, it is pretty much a crap shoot when ordering LEDs off Ebay. I think I am better off ordering them from an electronics parts place. /edit

There are two boxes on the parts list. One is around 2 different SIPs. You need one or the other (not both). The LEDs are 2V 10mA LEDs. To apply 10mA to them you need a 300 ohm resistor. I did not see a 300 ohm SIP, so I picked out a 330 ohm version. The other option is to use the 470 ohm SIP (this is what I used), which applies about 6.5mA to the LEDs. The LEDs will still illiminate and this leaves more current available for the ULN2803.

The second box is around the sockets for the 595s. The expensive one has a decoupling capacitor built in. It is about $1.20 more expensive. That does not sound too bad, but once you order 8 of them, you find that you are spending almost $10 more for these sockets. If you don't order the sockets with the cap built into them, you will need to order the decoupling caps at the bottom of the parts list. Solder them across the bottom of the PCB between pin 8 to pin 16 of the 595 socket.

Some comments on the RJ45 jacks that are on the parts list...they have an open top and back to them. So you can see (touch) the bare wires that go between the PCB pins and the contacts in the jack. Also, they have some small plastic tabs sticking out on the sides of them. Though I could get them all in the PCB with the tabs still on, I felt better about the fit after I removed one tab from each of the jacks with some snippers. If I find a jack that I like better, I will update the parts list.

Use the layout in step 2, paying particular attention to pin 1 of all the ICs. They arent going to work if you install them backwards...

Soldering components to a PCB is something that takes some practice. You need a small tip soldering iron ($10 at radio shack), some flux, and some thin solder (I used .032, but would like to try thinner). The best method I found is to hold the soldering iron at about a 45 degree angle (too horizontal and solder will build up on it). Dip the solder in flux. Touch the tip of the soldering iron to the component lead and to the PCB trace pad. Touch the solder to where the trace pad and component lead make contact until it starts to melt, then pull the solder and soldering iron away. Try to use as little solder as will do the job. Too much solder and some of your pads will grow to the point where they are touching adjacent traces...too little and you will have a weak solder joint.

If you are using the LEDs, make sure you have them installed correctly. They won't light if they are installed backwards. The LEDs I ordered had a long and short lead. The short lead (negative) went toward the SIP.

The SIP has a dot on it near pin 1. Pin 1 has a square around it in the layout in part 2 of this How To. Pin 1 is a common bus and needs to be installed in the ground trace coming from the trace that runs under the ULN2803s.

I use a custom made input cable. For the first two boards that I built, I did not put the input connector on the board. I just soldered the wires directly to the PCB. This will probably be what I do for most of the boards I build. The DB25 connector is about $2 at radio shack. I chose to use the solder on plug, but the crimp on should work just as good if you have all the associated tools to assemble it.

To see the pin-out of the LPT, got to the "How To" on this web site titled "Parallel Port Pinout." You will notice that there are a few pins you can get the ground from...I got mine from pin 18 because it is the closest pin to the other pins that are used (1, 2, and 14). On a side note, the picture in that How To is while looking at the jack on the computer. This also means it applies to looking at the BACK of the DB25 plug that plugs into it.

Hopefully this How To answers more questions than it creates. If you see anything wrong with it, let me know. Good luck!!