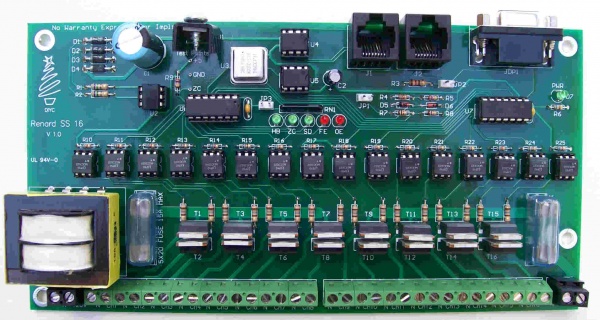 The Renard SS16 is a PIC microcontroller based Christmas light controller with 16 solid state relay circuits incorporated into the board. The board design is based on the PIC-based 8-port dimmer concept originally developed by Phil Short. Information on the original concept can be viewed here. Generic information pertaining to current Renard designs (including maximum channel count) can be found on the Renard wiki page. 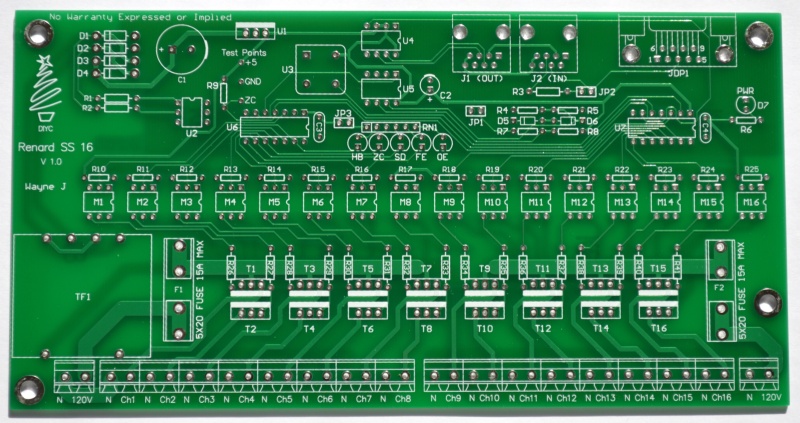 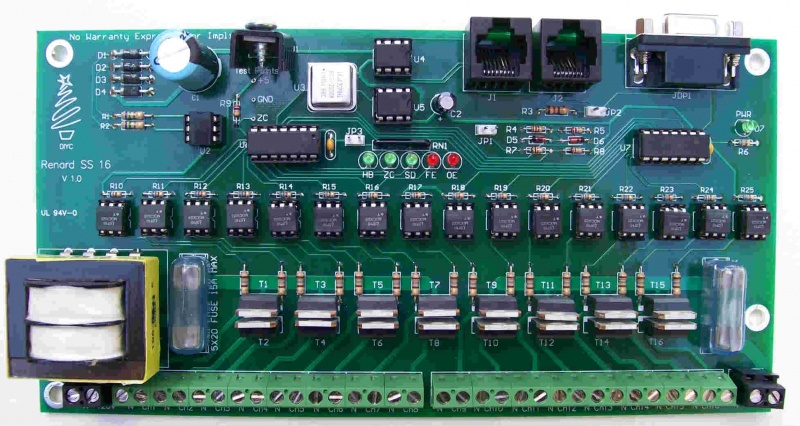 The PICs (U6 & U7) must be programmed with the correct firmware for the board to operate correctly. There are two types of firmware available: Operational and Diagnostic. The Operational firmware is what you need for normal board operation. The Diagnostic firmware is a troubleshooting aid to use when there are problems with the board.

The Renard SS16 generates all the DC voltage that it requires on-board and no external DC voltage source is required.

The Renard SS16 is divided into two banks of eight triacs. Each bank of triacs is capable of carrying up to 15 amps of current based on the trace width used on the pcb.

Based on the pcb trace widths, each triac can handle up to two amps of current. A heat sink is highly recommended when running the triacs at two amps. Care must be taken to ensure that the total load of the eight triacs in each bank does not exceed the rating of the fuse protecting the triac bank or 15 amps (whichever is less).

If both banks of triacs are being powered by the same AC input and a jumper is used to connect the two banks together, then the size of both fuses added together cannot not exceed the current handling capability of the input wire.

The BOM calls for a 10 amp fuse under that assumption that each bank of triacs will be independantly powered by a common/generic extension cord. Most of the common extension cords used by DIYC members are rated for only 13 amps and 13 amp fuses are not commonly found.

Hooking Up the Renard SS16 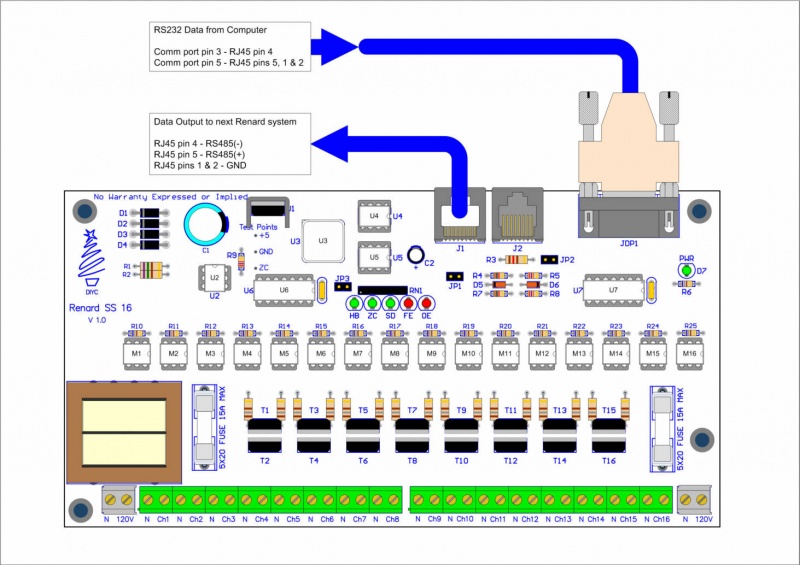 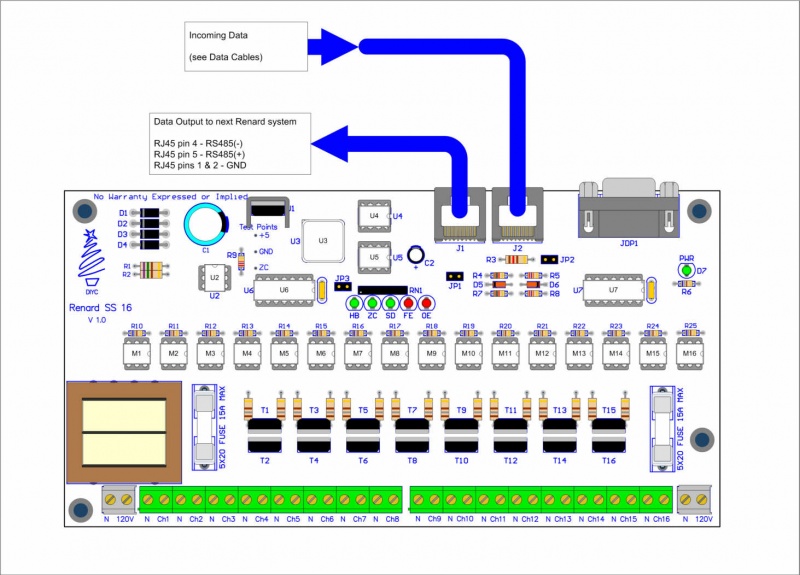 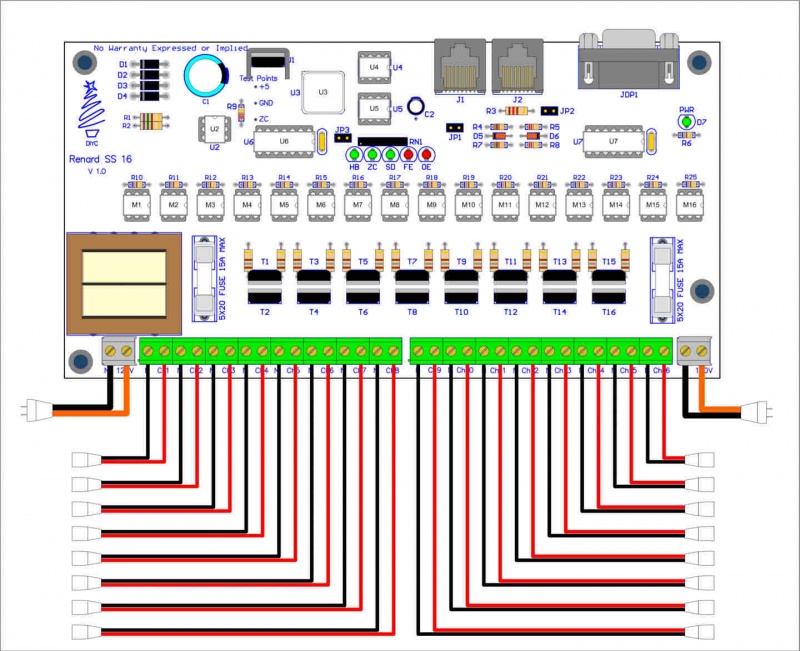 In the above layout, each bank of triacs has its own dedicated AC input (orange/black wires). 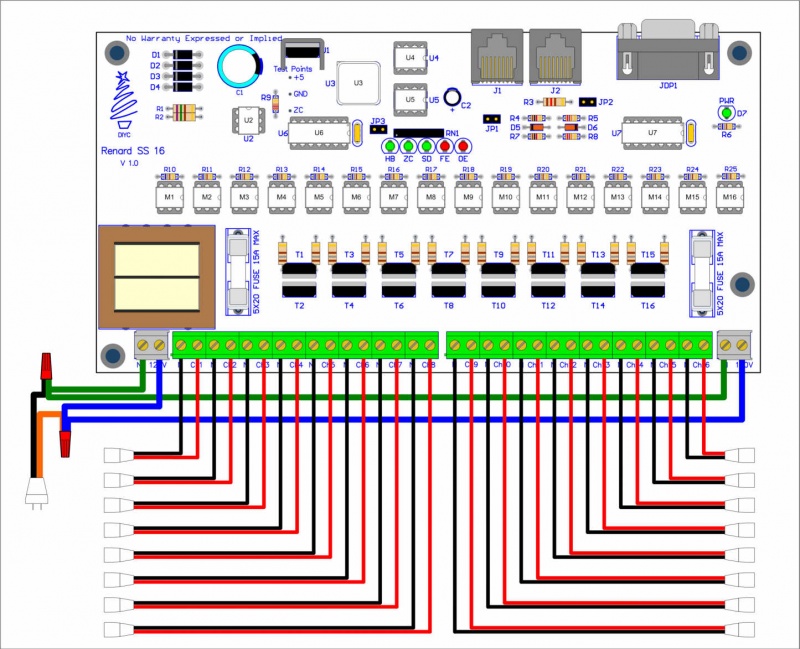 In the above layout, the main AC input [orange/black wires] is connected to two sets of feeder wires [blue/green wires] by a twist-on wire connector (commonly referred to as a wire nut). The feeder wires are then connected to the triac banks. 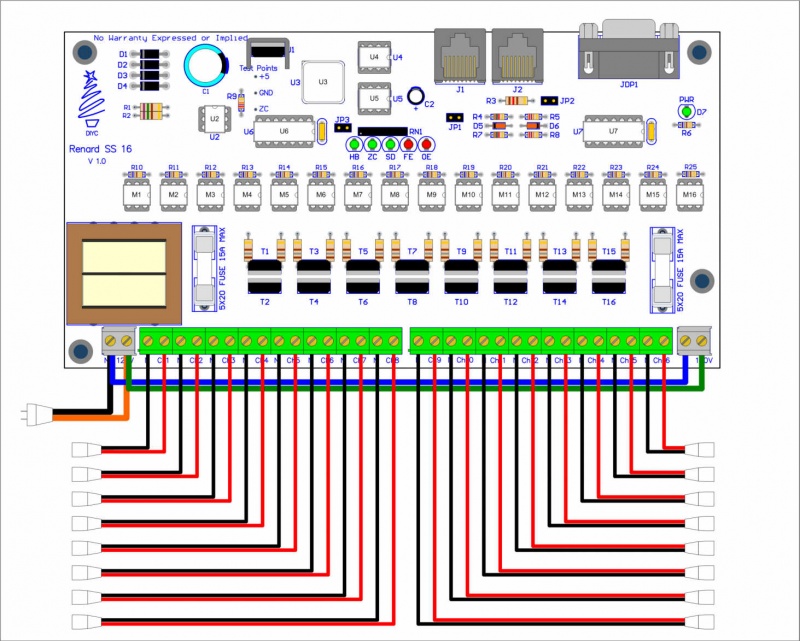 A pictorial "How To" can be found here using Option 3 WITH a daisy chain option. 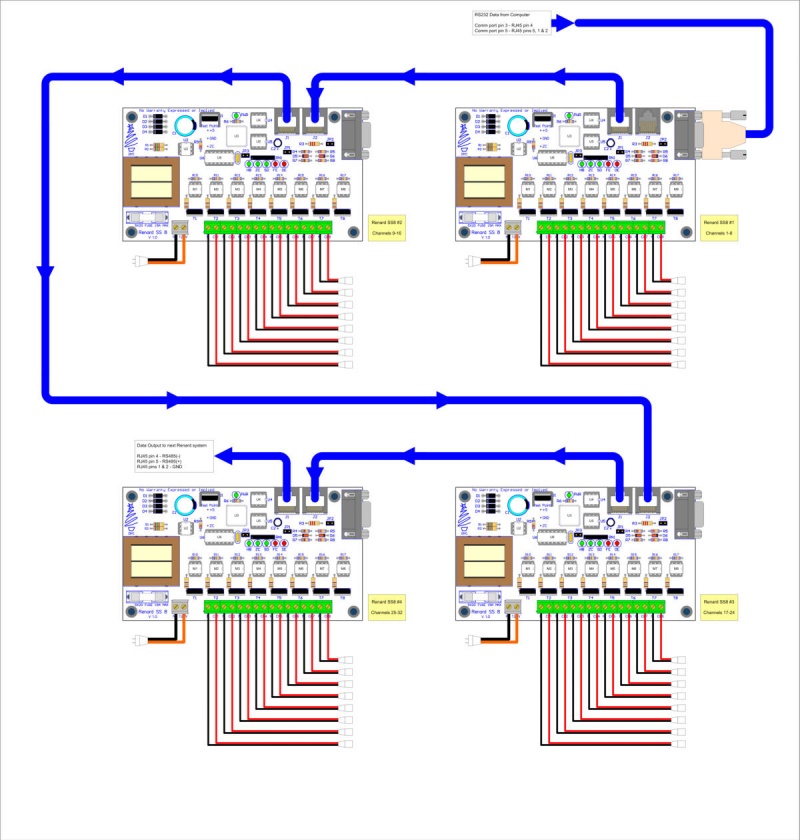 If you are unsure that you have built your hardware correctly, you should follow the procedures contained in the Renard SS16 Beginners Setup Guide. These procedures will guide you through the steps to help setup the hardware for the first time.

If you encounter any problems with your Renard SS16, you can go to the Renard SS16 Troubleshooting Guide. The troubleshooting guide contains a methodical process to try to isolate problems/malfunctions and gives suggestions of what to do to fix them.