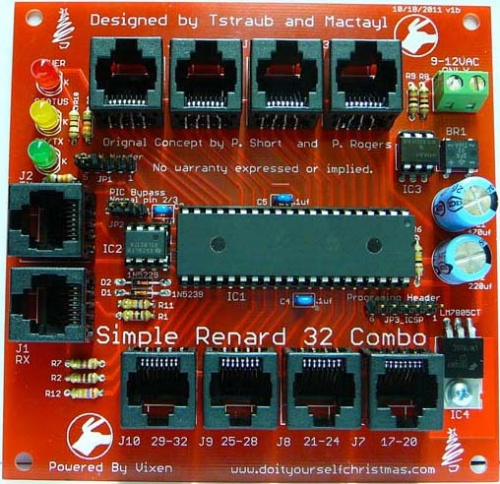 IMPORTANT NOTE: THIS BOARD IS NO LONGER IN PRODUCTION!

What is the Simple Renard 32 Combo?

The Simple Renard 32 combo is a low cost 32 channel controller designed to drive either ACSSRs or DCSSRs which switch their loads close to the item being controlled. Unlike other Renard designs like the Renard 64XC, the Simple Renard 32 Combo makes use of a different PIC, the PIC18F4520. This PIC allows 32 chanels per PIC to be controlled compared to the usual 8 channels per PIC (16F688) used in most Renard designs. This allows a smaller board and lower total cost.

The Simple Renard 32 Combo controller is used to control loads in a "star" type system. This means, that the main controller stays in a central location while the SSRs are on the tips of the "spokes". The real savings in this layout is in the power cables. Most of the channel power cables are very short. This system is very good for widely spaced display items with small groups of channels in one area like mini-trees.

The board requires a good 9-12vac external power supply. An on board voltage regulator provides the necessary power for the PIC on the pcb.

The board was designed in the Fall of 2010 by Mactayl and tstraub, and based on original concepts by p.short, p.rogers.

How does the Simple Renard 32 Combo work?

The PIC in the Simple Renard 32 Combo uses the internal PIC oscillator.

So - now that the PIC has the updated dimming levels for all of it's channels, it enables each of its outputs using PWM or Pulse Width Modulation. It is important to grasp that the voltage levels are not controlled - it is the amount of time on and off that is varied within a small cycle of time for each update. It seems logical that to dim things you would just change the voltage from 12v to 9v for example. Instead, the voltage is on at the full 12v for x amount of time and then it is off (0v) for the y amount of time - it is not something in-between. The cycle time is controlled by the PIC in the case of the Simple Renard 32 Combo. The Simple Renard 32 Combo has a Zero-Cross (ZC) signal which is created by an opto-isolator attached to the AC line (via a transformer). The Zero Crossing (ZC) signal is the point at which the AC signal crosses zero volts. The ZC point needs to be known so that the triacs can be turned on/off at the correct time to achieve a dimming effect for AC loads. The Renard 32 Combo can use the ZC (for ACSSRs) to trigger the dimming or when the ZC chip is removed (for DCSSRs) the PIC basically makes up it's own timing but it closely resembles what is seen with normal ZC usage.

The output from the PIC is connected to either ACSSrs or DCSSRs to control loads.

The Version v.1b is currently the most recent version of the Simple Renard 32 Combo in production.

In addition to the PCB, you will need the following components:

The Kit is available at DIYLEDExpress.com

The Simple Renard 32 Combo was designed to fit in the CG-500 Demarcation Enclosure available from numerous vendors including www.diyledexpress.com and www.wlcventures.com

The Simple Renard 32 Combo is a simple device to assemble and test. It is easiest if you build the units by inserting the various components from smallest to tallest . 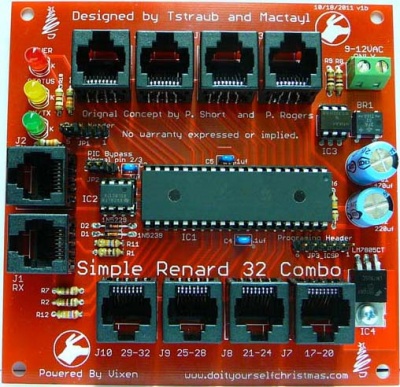 Congratulations! That completes the construction of the Simple Renard 32 Combo !

The design is fairly straight-forward and as long as you are sure of the voltage inputs and the PIC is flashed properly you should not have any issues if your soldering is good.

The data wiring of the Simple Renard 32 Combo is the same as the RenardSS series so you can follow the cabling requiremnents for that.

Connect the Simple Renard 32 Combo to your PC using standard wiring practices as on the Wiki for other Renard controllers. Develop a Vixen sequence to turn on/off each channel in groups of four using the appropriate Renard plug-in. Channels 1, 5, 9, etc should have the same programming but only have 1 channel in the group (1,2,3,4) on at a time. This helps ensure you have unique channel addressing from each RJ45 output.

With the sequence running, plug in a SSR Device into each RJ45 and ensure each channel turns on in order. Once that is complete you change the on/off to ramp up/downs to verify dimming operation. Finally, you can perform a full load test with 8 devices installed.

The Simple Renard 32 Combo was designed to be mounted in any convenient enclosure, however it will fit nicely in the CG-500 enclosure sold by various vendors including DIYLEDEXPRESS.COM or WLCVENTURES.COM.

If you are using Start Address Programming, you can use the PIC bypass to allow the data to flow thru the Simple Renard 32 Combo without the usual Renard "address eating". If you use a jumper across pins 1/2 then the data stream that comes into the device goes out exactly as it came in with no addresses consumed by the Simple Renard 32 Combo. The default position is a jumper across pins 2/3.
Pin Layout
1 = Data In From RS485 IC
2 = Data Out to RS485 IC
3 = Data Out from PIC

This header allows the PIC to be programmed or reprogrammed while still plugged into the circuit board. To use the ICSP header plug your PICKIT programmer directly onto the header, making note to align pin 1 of the header with pin1 of the PICKIT.
Pin Layout
Pin 1 = MCLR
Pin 2 = +5 volts
Pin 3 = GND
Pin 4 = PGD
Pin 5 = PGC
Pin 6 = PGM/RB5

The board requires a 9-12 vac power supply. It will not work with a DC power supply. A 9-12vac wall wart power supply can be connected to the power input terminals of the board.

Since the board does not have a fuse, it it recommended to add an in-line 1A fuse to the power input.

Connecting up the Simple Renard 32 Combo

The outputs of the Simple Renard 32 Combo is connected via straight thru Cat5 cables to SSRs.

Warning...The Simple Renard 32 Combo does not have an on-board fuse. You must use an external/inline fuse holder with a 1A fuse for the power input for safety.

The board is powered by connecting a 9-12vac power supply to the power input terminal connector on the upper right corner of the board. The power supply must be AC to generate the zero crossing signal for dimming ac circuits.

The on board voltage regulator circuit generates the +5vdc to power the on board circuits and provide switching signals to the attached SSRs.

The Simple Renard 32 Combo has one version of the software available.

Unlike typical Renard firmware, you must make changes to the .inc file, not the .asm file to adjust the operating parameters.

Note: If you want to use DCSSR's you should remove IC 3 (H11AA1) so ZC will not be used and this will allow PWM to function. 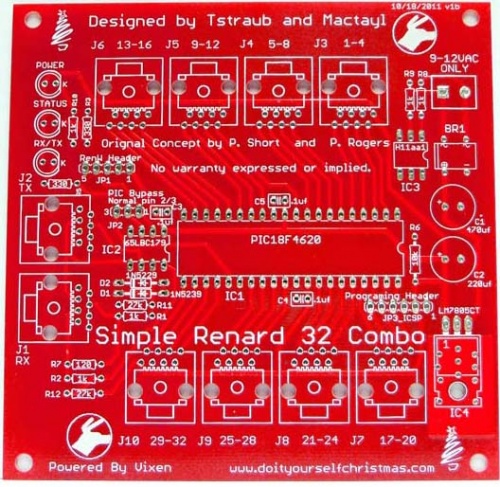 The Simple Renard 32 Combo is designed to drive either all DCSSRs or all ACSSRs, not a mix of SSRs. The unit is configured for DCSSRs by: