Warning: "continue" targeting switch is equivalent to "break". Did you mean to use "continue 2"? in /home/doityour/public_html/wiki/languages/LanguageConverter.php on line 715
 Waterproofing Pixels - doityourselfchristmas.com

Over the last few years there have been many different types of pixel nodes coming from China. The waterproofing on the pixels vary from manufacturer to manufacturer. While many claim to have pixels with an IP68 rating (the highest) those claims are often exaggerated. Recent construction techniques like epoxy resin molded bodies have helped to make the units more waterproof, however the quality of the nodes often vary. The biggest weakness is where the wires enter the back of the pixels and how it is sealed. Silicone injection molded pixels have frequently had water leakage issues. The water can find its way into the pixel via flexing of the wires or simply by wicking up the wires due to temperature changes. Failure to properly waterproof pixel nodes can result in their destruction due to water damage. 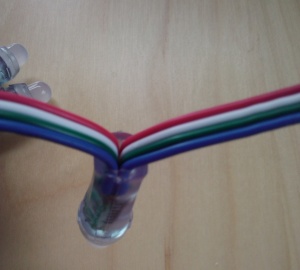 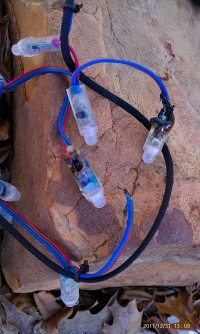 Sandevices.com the manufacturer of the E680-E682 Pixel Controllers has the following note on its website that explains the issues with pixel nodes.

"There are additional considerations for outdoor displays. The first is waterproofing. Bear in mind these comments refer to the popular Chinese‐made pixel strings. First, it’s important to understand the original purpose of these pixels. They were designed to be installed in digital signs, pushed in from the back of the faceplate of the sign, in a pretty closely spaced grid. So, they are relatively waterproof, as in designed for outdoor use, but there originally intended application doesn’t subject them to direct rain or snow because they are pretty‐much shielded by the sign enclosure. The weak spot is that there are two sets of wires going into each pixel, two 3 or 4‐conductor flat cables. These two flat cables are just pressed against each other and they enter the pixel through a single hole in the silicone. The problem is that there is no silicone between the two sets of wires, and this not only creates a potential entry point for moisture, with a ‘hanging’ string, the weight of the string will tend to pull the silicone apart slightly, allowing a larger path for water entry. Some pixels are made from a pretty stiff silicone, others are made from silicone that’s a lot more flexible. Those made from the stiffer silicone are probably more inherently waterproof, but those made of the softer stuff do lend themselves to some additional waterproofing by a quick shot of hot melt glue between the two sets of wires. The silicone is soft enough that you can just jam the tip of the glue gun in, forcing the wires apart a bit, then you shoot in a dab of glue, and when you remove the gun the silicone snaps back and seals everything up tightly. I personally ran 40 strings of pixels this year, about 20 of each type. I did do the hot‐melt glue waterproofing of the softer pixels. All strings survived the season."

The common methods of waterproofing pixel nodes are:

Here is a good thread about how different materials hold up after exposure to weather.

There are several videos of different methods to waterproof pixels.
Plasti Dip Diping Pixel strings in Clear Plastidip
Liquid Tape Injecting Liquid Tape into the back of Pixel Nodes

Here is a interesting thread about different sealants for electrical connections on pixels. It has photos and discussion about effects of weathering on the various sealants.

The following supplies are available from numerous vendors including A WarehouseFull and McMaster-Carr.
Clear UV Resistant Plasti Dip
Liquid Tape
Solvent to thin coatings
Syringe to inject into back of nodes
GE Silicone II Window & Door Clear Silicone Caulking (Only use Silicone II which is Neutral Cure not Silicone I which is Acid Cure!)
Hot Glue

Items can be rated based on a standard classification system called an IP Rating. IP stands for Ingress Protection. While many Chinese manufacturers claim various IP Ratings, many people are suspect of the ratings claimed.

The first digit indicates the level of protection that the enclosure provides against access to hazardous parts (e.g., electrical conductors, moving parts) and the ingress of solid foreign objects.

The second digit indicates the level of Protection of the equipment inside the enclosure against harmful ingress of water.