Warning: "continue" targeting switch is equivalent to "break". Did you mean to use "continue 2"? in /home/doityour/public_html/wiki/languages/LanguageConverter.php on line 715

Deprecated: The each() function is deprecated. This message will be suppressed on further calls in /home/doityour/public_html/wiki/includes/MagicWordArray.php on line 197

Notice: Trying to access array offset on value of type null in /home/doityour/public_html/wiki/includes/profiler/SectionProfiler.php on line 104

Notice: Trying to access array offset on value of type null in /home/doityour/public_html/wiki/includes/profiler/SectionProfiler.php on line 104

Notice: Trying to access array offset on value of type null in /home/doityour/public_html/wiki/includes/profiler/SectionProfiler.php on line 105

Notice: Trying to access array offset on value of type null in /home/doityour/public_html/wiki/includes/profiler/SectionProfiler.php on line 105

Notice: Trying to access array offset on value of type null in /home/doityour/public_html/wiki/includes/profiler/SectionProfiler.php on line 106

The Renard-595 Converter (aka Ren-C) board is designed to allow the 64-Channel Olsen 595 and GRINCH controller boards to be controlled through the serial port of a PC. The Ren-C also adds a 192-level dimming capability to these boards.

The current 595-style (including the GRINCH) controllers are designed to turn display lights on and off under computer control. They are connected to the parallel port of the controlling PC and have the capability of being daisy-chained together. This daisy-chain configuration allows up to approximately 1024 channels to be controlled through one parallel port. This large channel count is highly desirable by many users but the lack of a dimming capability frustrates many others. Previous attempts to add a dimming capability to these systems resulted in using eight on/off channels to create one channel with dimming capability. The complexity of the design and cost in resources kept it from being widely used, thus the need for a different solution and the birth of the Ren-C. 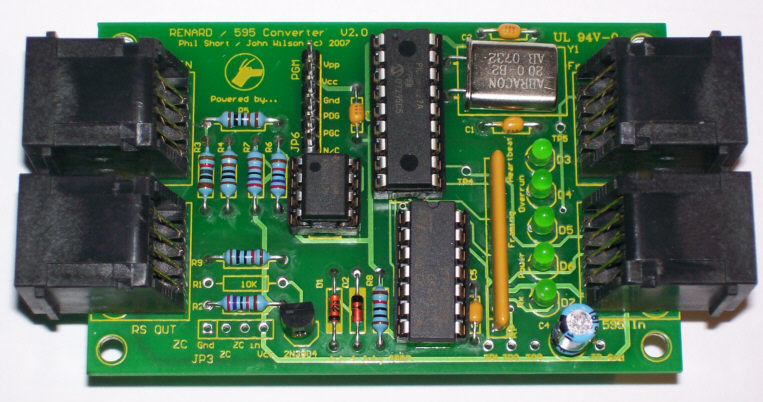 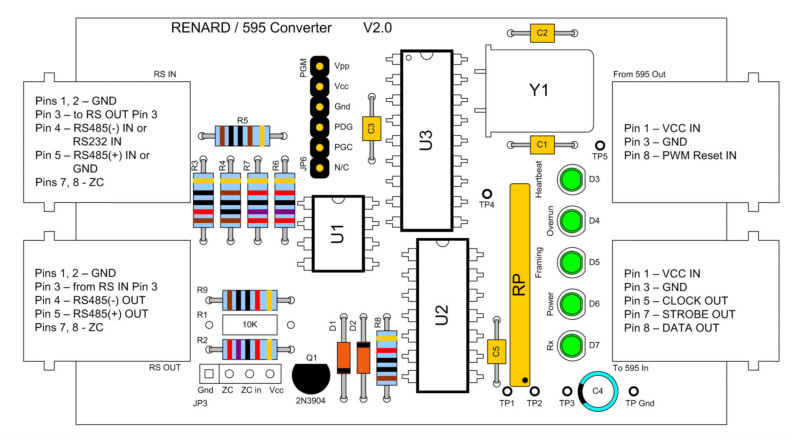 The PCB diagram can be found here.

The PIC (U3) must be programmed with the latest firmware for the Ren-C to operate properly. The firmware can be found here.

Some of the signals on the Ren-C are fairly high-speed (2.5 MHz), so the cables between the Ren-C board and the 595/GRINCH controller should be as short as possible. Cable length should not exceed 6".

The Ren-C requires an external power source to operate. This power source must be regulated/filtered 5 VDC. There are two possible methods of applying power to the Ren-C.

The Ren-C can get it’s operating voltage from the COOP OLSEN 595 or GRINCH controller board that it is connected to. With this option the COOP OLSEN 595 or GRINCH controller board would be connected directly to the external 5 VDC power supply at either P1 or J2 respectfully. By placing a shunt on J1, this would allow the 5 VDC to be passed to the Ren-C via the RJ45 IN/OUT connectors on pin 1.

The Ren-C can be powered directly by an external 5 VDC power supply. This can be accomplished by connecting 5VDC to pin 4 and GND to pin 1 of header JP3. When using this option you should remove the shunt from J1 of the connected COOP OLSEN 595 or GRINCH controller board to prevent any problems with the associated external power sources.

There are many options of what to use for the external power source. Some users prefer to use an unused hard drive power connection inside the computer that is being used to run VIXEN. Others prefer to use an old computer power supply that they modify to run as a stand-alone power supply. And there are others that have had success in using wall-warts but care should be used with wall-warts since not all of them provide a regulated/filtered output.

The Zero Crossing (ZC) signal is one of the most difficult signals for new users to understand. Simply put, ZC is the point at which the AC signal crosses zero volts. The ZC point needs to be known so that the triacs can be turned on/off at the correct time to achieve a dimming effect.

One of the factors that adds to confusion is that the ZC signal is actually different at various points in the overall light control process. The output of the Ren-T (green trace in picture below) is commonly referred to as a ZC signal. This raw ZC is not in a suitable form to be used by the PIC. By applying this signal to base of Q1 on the Ren-C, we will get a new ZC signal (purple trace in picture below) that the PIC can use to for the dimming timing.

Now that you understand the ZC signal, you can better decide how you want to get a ZC signal on the Ren-C.

ZC can be generated on the board, by connecting a 9VDC (unregulated and unfiltered) supply to pins #7,8 of the RS IN RJ45 socket. This input signal (green trace in picture below) is a pulsating signal, rising from 0V to 9V and back in time with the AC power line (100 or 120 times per second, depending on your locale). This signal is the normal output from the Ren-T or it can be created using this circuit.

ZC can be generated on the board, by connecting a 9VDC (unregulated and unfiltered) supply to The "ZC In" pin (#3) of JP3. This signal (green trace in picture below) can be created using a schematic like this circuit. With this option, you will need to install a 10K resistor in location R1 instead of R9.

ZC can be connected directly to the board, by connecting a ZC Signal (purple trace in picture below), to the "ZC" pin (#2) of JP3. With this option, you can remove R1, R9 and Q1.

When the REN64XB and RENC were first released, there was an extra board that was made available, the RENT. The function of the RENT was to provide power and a source of ZC to the controllers.

The RENC did not require separate power as it draws 5 V DC from the GRINCH board. What it does need is a source of ZC.

What is ZC? Zero Cross reference. When dimming, the RENC needs to know the start of the AC signal waveform, i.e. when it crosses over Zero V AC. A small sample of AC voltage is required to obtain the ZC.

There are a couple of options. 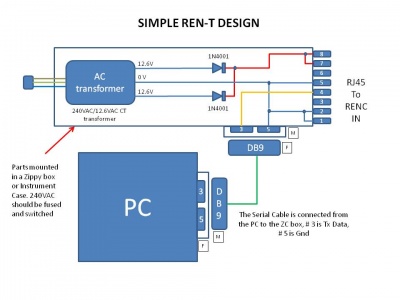 Option 2 - Use a small AC stepdown transformer (12.6V CT) and build a OPTOISOLATOR circuit to provide a source of ZC. NOTE - the diagram should have an H11AA1, not an H11A1 in this circuit. 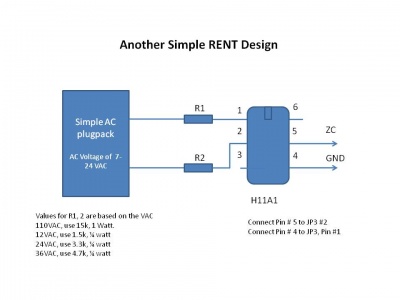 Protocol Version: 1
COM1 (or whichever COM port you are connected to)
Baud: 57600
Parity: None
Data bits: 8
Stop bits: One