The Rev6 board needs only one RJ45 jack and only two XBee female headers. Otherwise, parts are the same.

The only important difference between the standard board and the SMA board is the orientation of the XBee modules. The standard board has the modules pointing upward; the SMA version has them pointing downward to allow for the long RPSMA antenna connector. Pay careful attention to the orientation of the XBee when plugging it into the board. If you have the standard board, plugging in an XBee module with an SMA connector upside-down will NOT WORK. Likewise, plugging in an XBee with a 1" whip the wrong way on an SMA board won't work, either.

The latest Rev6 version of the board has space for only one XBee module and uses a jumper to make the board be either a transmitter (TX) or receiver (RX). The Rev6 board cannot function as a repeater board as it has only one RJ45 jack, but it is about 30% smaller in size and has fewer parts so it's slightly less expensive to build. 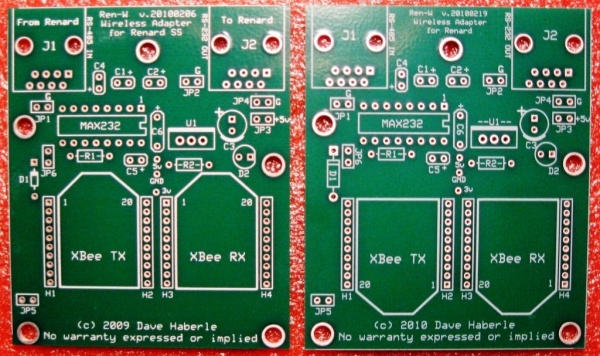 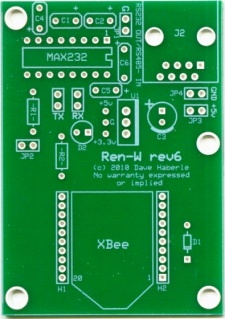 OVERALL CONCEPT: It is usually easist to assemble a circuit board using the "height" concept -- start with the parts that lay lowest or on the board itself, then the parts that stand taller and finishing with the tallest parts, installing them last. 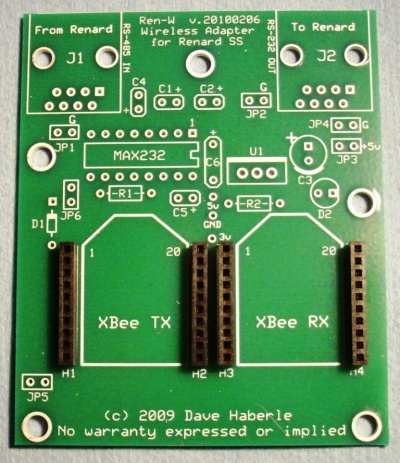 The basic construction steps are identical for both the SMA and Rev6 versions of the board; the Rev6 board also uses the same part numbers. Obviously, the Rev6 has fewer parts, and where the parts don't exist, don't install them! Caution - the pins on the XBee female headers are quite tiny and require very little solder. Too much solder may flow down and fill the pin hole in the header itself and prevent plugging in the XBee later on. 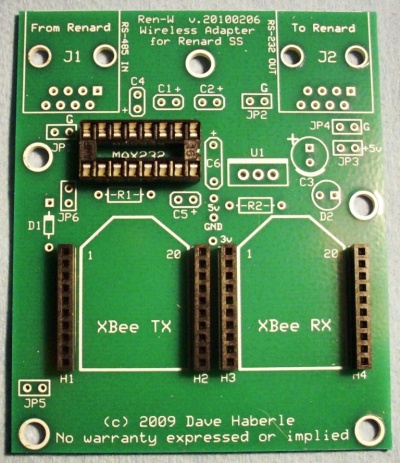 2. Solder the 16-pin DIP socket into the MAX232 location. Note the position of pin 1; the notch faces to the right. If no socket is to be used, solder the MAX232 directly to the Ren-W board; verify the pin orientation before soldering. 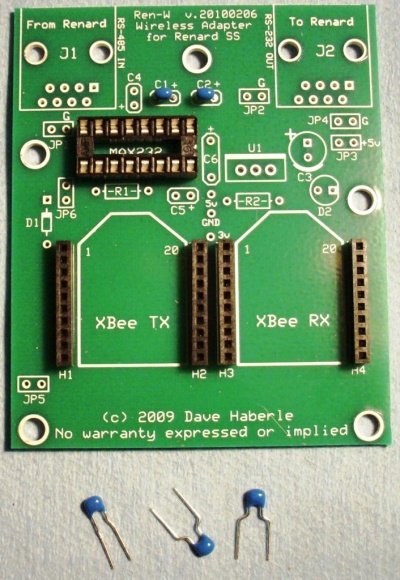 3. Solder capacitors C1 and C2. You may wish to straighten the leads to fit the holes better such as the example at the bottom of the picture. There are no polarity concerns for non-polarized capacitors. (Note: The polarity markings on the board are for the convenience of users who are using electrolytic capacitors instead of the non-polarized type. 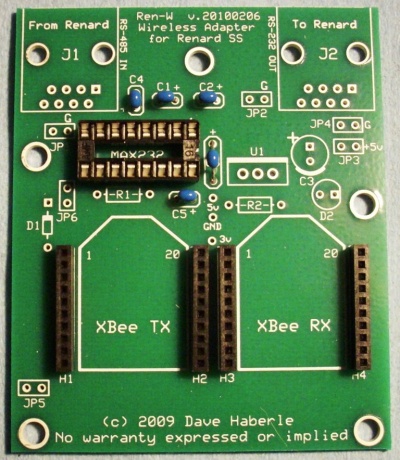 4. Solder non-polarized capacitors C4, C5 and C6. Like C1 and C2, if electrolytic capacitors are used, observe the + polarity markings on the board. 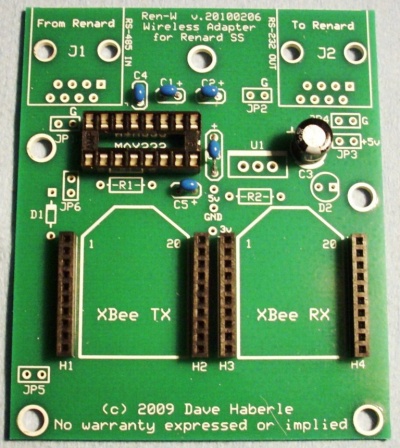 5. Solder electrolytic capacitor C3. Note the polarity: the + side into the square pad (top) closer to jack J2 which means the stripe on the capacitor faces DOWN. 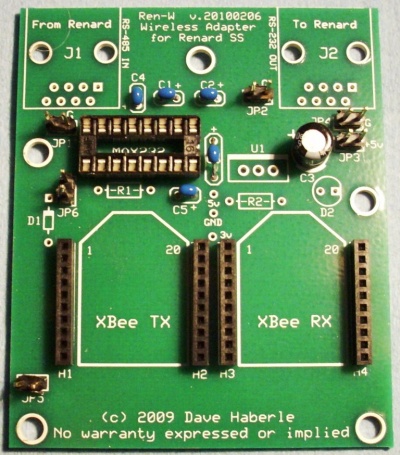 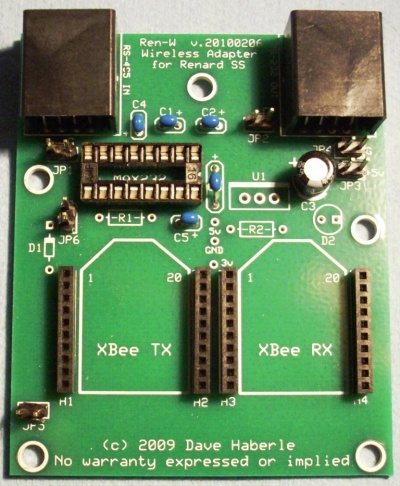 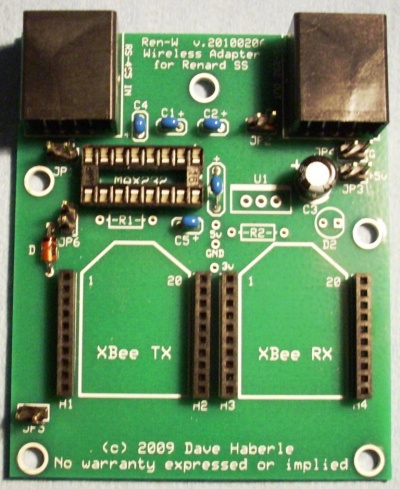 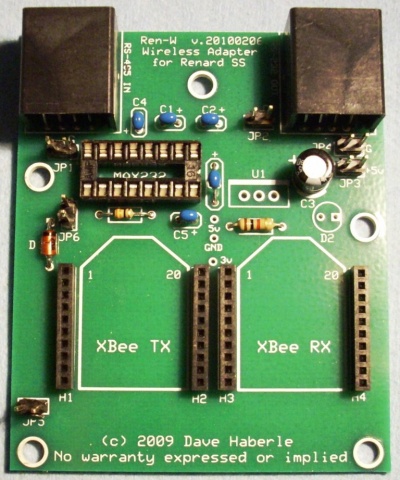 9. Solder resistors R1 (orange-orange-black) and R2 (brown-black-red). R2 is only required if the optional power LED (D2) is used. No polarity concerns. 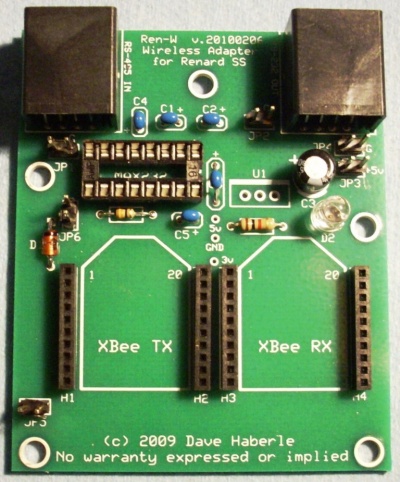 10. Solder the optional power LED at position D2. Note the polarity – the flat side/cathode/shorter lead faces to the mounting hole immediately to the right of D2. 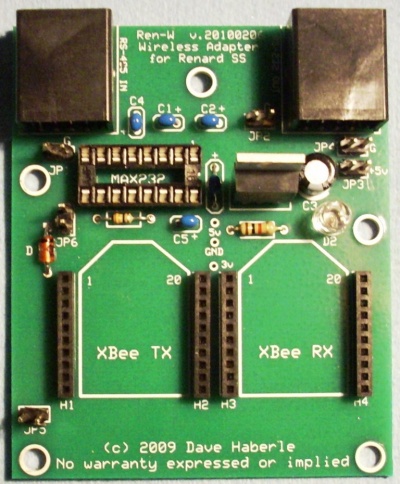 11. Solder the 3.3v voltage regulator U1. On the SMA board the metal heat sink side faces toward JP2 (top); on the Rev6 board the metal heat sink side faces toward C3 (right). The need for an additional heat sink is highly unlikely as the supply voltage is only 5vdc. At this point, applying power to the SMA board should light the LED (if installed) and the voltage test points in the middle of the board should register the proper voltages. The Rev6 board requires that the XBee radio be in the sockets; the LED will then blink showing the XBee radio is operational. Disconnect power before continuing with the next step. 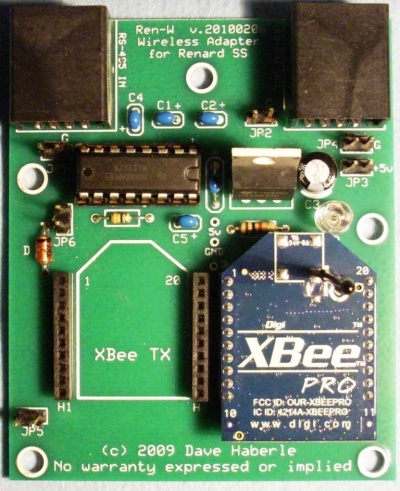 12. Install the MAX232 and XBee module(s) in their respective sockets: use the XBee RX side for a receive-only board, the XBee TX side for a transmit-only board. Note the position of pin 1.

13. Install optional jumper shunt at JP6 if necessary. This bypasses the R1 resistor (33 ohms) and allows a weaker RS-485 signal through to the XBee radio in transmit mode. Normally, this jumper shunt is not necessary.

14. Install optional jumper shunt at JP5 if necessary. This makes the Ren-W into an E-Mode repeater where a single XBee module in the TX position serves as both the receiver and transmitter.

17. REV-6 board only: install 2-pin jumper headers at the TX and RX locations. 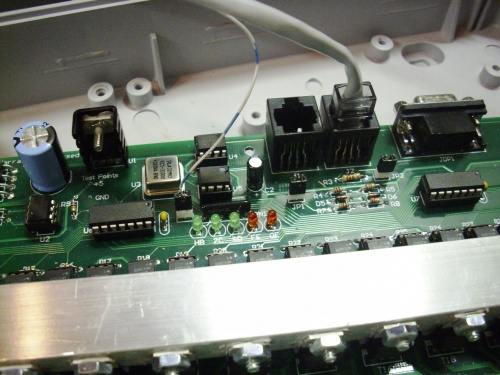 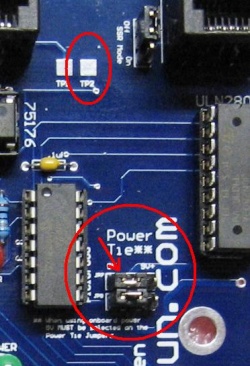 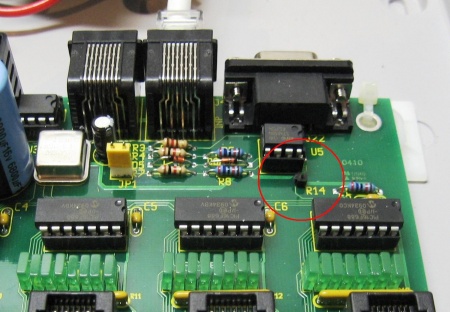 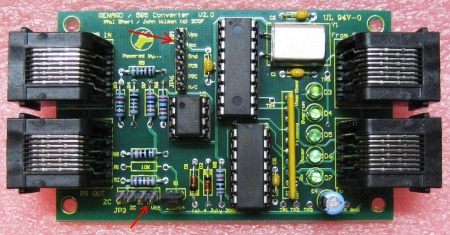 Connecting the Ren-W to a Renard SS Controller

JP1 is an optional RS-485 input connection. Because an XBee module can be programmed via serial communications using a simple AT commands from within a terminal program such as Windows Hyperterminal, these headers provide external access to the R1IN (pin 13, JP1) and T1OUT (pin 14, JP2) serial connections of the MAX232 chip, which in turn, communicates with the XBee module. Both data and ground are provided; ground is the right pin and is marked with G. Using the XCTU software and an XBee programmer board is vastly more convenient that manually configuring a module using AT commands but Digi provides ample documentation for AT command line programming. You can also measure the input voltage of the RS-485 signal at JP1; an acceptable range is +3.3 to +4.8 vdc. It is not expected that this voltage will exceed 5vdc.

JP2 is an optional RS-232 output connection and can also be used to connect Ren-W to other serial devices. The output voltage is inverted and should be -5.0 to -5.5vdc, depending on the original input voltage.

JP6 is used to bypass the 33ohm resistor R1 which helps moderate the RS-485 serial signal’s current. The combination of R1 and zener diode D1 form a voltage/current protection circuit that limits the serial voltage to a maximum of 3.3 volts before it enters the XBee module’s DIN port. However, not all RS-485 serial signals are of the same voltage and if your serial signal is less than +3.3 volts, you may find that the integrity of transmitted data may increase by placing a shunt jumper on JP6 to bypass resistor R1. If the serial signal is +3.8 vdc or greater, you should leave JP6 open. The XBee module includes a modicum of internal protection and in testing, we found that an XBee can accommodate +5vdc at the input DIN for a short period of time (a few seconds), after which the XBee may stop responding and appear to “lock up.” Temporarily removing power to the board usually resets the XBee so that it will function again.

Almost in the exact center of the Ren-W board are three test points marked 5vdc, GND and 3vdc (actually 3.3v). While the actual voltages may vary slightly, the tested values should be very close to those figures. Our prototype measured 4.96v and 3.29v.

If you know exactly how many receive-only and/or transmit-only boards you need and want to save some cash, you can economize by not populating the board with parts that will not be used. For example, below are pictures of stripped-down yet fully functional transmit-only (left) and receive-only (right) boards. Note the parts that are missing on each board. These examples also show the standard XBee radio, not the Pro version, which cuts cost even more, although the standard XBee is quite limited in transmission range. (Price comparison: the Standard Xbee is $19, XBee Pro is $32, XBee Pro with SMA connector is $34.): 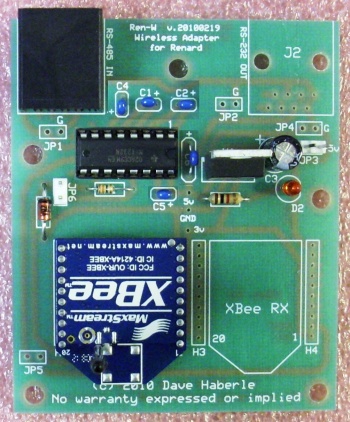 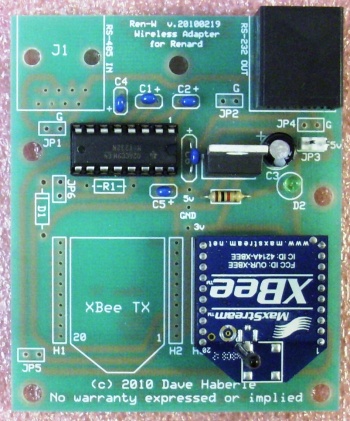 Bottom line: a fully-populated Ren-W board totals about $43.38 for parts with the XBee Pro radio. If you don't need the extra power of the Pro version and opt for the standard XBee, you could build a transmit-only or receive-only board for about $26. Home-etch the boards yourself and you could have a fully-functional two-station system for about $50, and using the XBee Pro version would cost only $26 more for the pair. So if you're on the fence about wireless, you can see that it doesn't have to cost an arm-and-a-leg.

Mounting a Ren-W and SS24 Controller in a CG2000 Enclosure 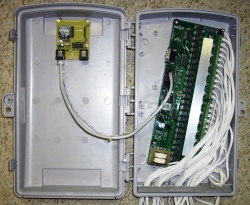 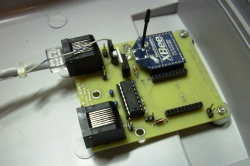 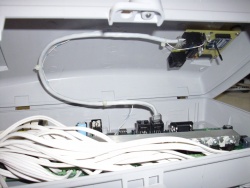 Using side-entry RJ45s on the Ren-W and looping a cat5 cable from the Ren-W to the SS24, stress is minimized on all RJ45 connectors and the case can easily be fully opened. The Ren-W is mounted at the top of the case, to minimize magnetic interference from the SS24's transformer, and the SS24 is mounted diagonally in the CG2000 case to allow room for the antenna as well as a little additional distance from the triacs, another potential source of interference.