The Ren-W circuit board is a very simple design but good soldering technique is still extremely important.

Voltage Measurements: three test points are just below pin 16 of the MAX232 chip/socket (circled in red): 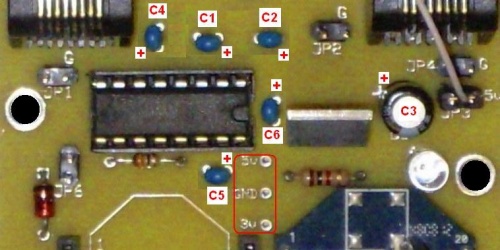 The Ren-W board was designed for home-etching and thus has very generous traces and solder pads. Be certain that the following components are mounted on the board properly: 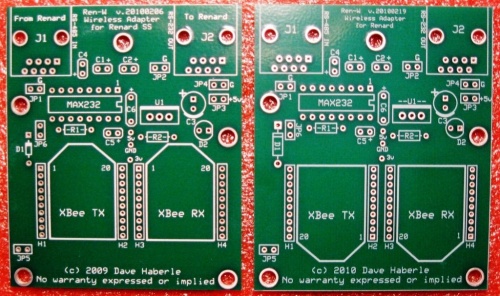 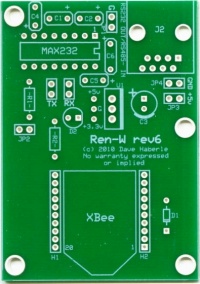 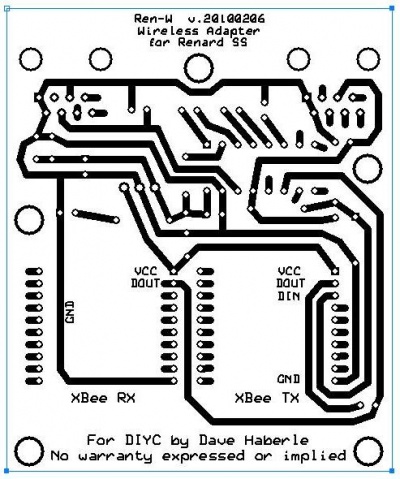 When you study the underside (copper) side of the circuit board, a few things become readily apparent:

Interaction With other Wi-Fi Devices

Xbee radios operate in the 2.4ghz frequency spectrum, the same spectrum as your wi-fi router or wireless access point. It is possible that you may encounter interaction between the two if the wi-fi device is in close proximity to a receiving XBee radio. The symptom is misfires or it may even appear to be randomly responsive. For example, a wireless laptop with a live, wireless connection could negatively influence the reception of a nearby controller with a Ren-W, or a wireless webcam placed near a remote controller with a Ren-W could easily influence that Ren-W's ability to discriminate the Xbee control signal if the webcam's transmission is too strong.

Possible solution: Wireless routers, webcams, access points (etc.) usually have the option to use a "channel" as the primary communicating link. XBee radios also have a channel setting and depending on whether it's a regular Xbee or an XBPro, the channel options may differ. The default XBee channel is channel "C." Try changing the XBee radios to a different channel and see if the conflicts go away. Note that the channel setting must be made on ALL XBees that are to communicate with one another.

Even though normal broadcast FM is in the megahertz frequency range while XBee radios communicate in the gigahertz range, it's possible that when the XBee transmitting radio is very close to the FM transmitter's antenna, some interaction may occur causing either distortion in the FM radio signal or possibly some interference with the XBee if the FM transmitter is very powerful. It's probably best to keep them separated by a few feet if possible.

NOTE: This patch applies ONLY to Ren-W boards prior to version 20100622, and it does not apply at all to the Rev-6 or Rev7 boards.

A better and more secure transmitter can be made by using only the -485 signal and allowing the Max232 chip to invert it before sending it to the XBee. The patch has been well-tested and is very easy to make. You probably will need to make the change only to one Ren-W board if you plan to use it as a transmitter direct from your PC instead of using the XBee Explorer board. Here's how: 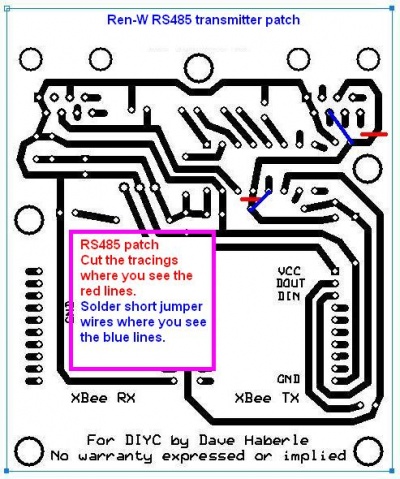 This procedure gives you a chance to see what the Renard data looks like to a controller and it serves ad a terrific way to test a transmitting Ren-W board as well as a receiving XBee module to make sure they're using the same communication parameters.

An issue has been reported and reproduced on the Ren64 whereby at 57600 baud, channels 57-64 act inconsistently. They seem to work okay with the ALL CHANNEL test and appear to work okay with most blinky-type activity, but in slower testing, some channels may not come on at all. It's important to know that the problem is not with the Renard boards or the Renard firmware: the problem is that the XBee's communication speed is a bit fast and also that certain versions of the XBee firmware have a bug in the serial settings. Changing the firmware and XBee radio to operate at 38400 baud completely solves the problem. However, this also lowers the total number of channels that can be controlled on a single com port at that speed. Another solution is to use only channels 1-56 on the Ren64 controller and continue to operate at 57600, which effectively provides for up to 254 usable channels out of the suggested maximum 286 when sequencing at 50ms. Two additional solutions are available: one is a combination hardware/firmware modification on the Ren64; the second is a firmware modification on the XBee radio coupled with a changed Vixen settiong. Be sure to read BOTH solutions before you start hacking your board! First, the Hardware/Firmware modification of the Ren64 board:

SOLUTION #1- Hardware/Firmware modification on the Ren64 board - (thanks to tweist!)

Disconnect pin 5 of the U14 pic, and connect a jumper wire between pin5 and pin 1 of U5 (the rightmost ST485BN chip). Then reflash the firmware on the U14 pic with start address 4.

Here's a slick way to do it that won't compromise any traces on the Ren64 board:

1. Bend pin 5 of a spare 14-pin DIP socket out to the side and piggyback it into the U14 socket. Solder a small wire onto the exposed pin 5. 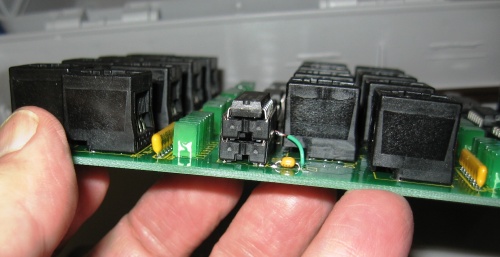 2. Drill a small hole next to U14 and fish the wire through it. There is ample room for the hole, but use caution nevertheless. A small piece of tape on either side of the piggybacked socket will keep it snug. 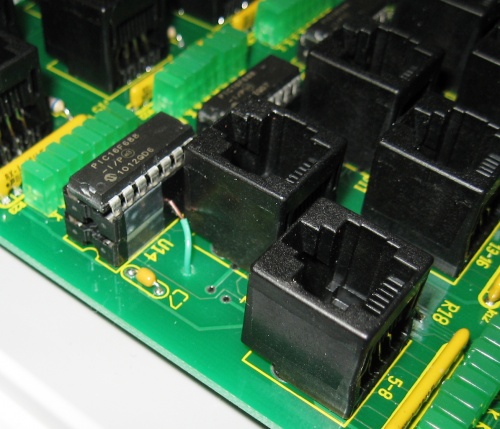 4. Remember to flash the U14 pic with start address firmware set with start_addr 4.

Unsolvable communication issues have been reported by users who have XBee radios that use XBee firmware version 10CD. It is possible that other versions also have a similar problem, but upgrading the XBee firmware to version 10E6 apparently solves the issue when you set the XBee firmware's parity setting to 3-MARK PARITY. The other setting change is to set your Renard plugin com settings to 57600, 8 data bits and 2 stop bits. However, one of the other issues is that XBee version 10CD is quite cantankerous and generally doesn't upgrade itself. Here's the solution to that:

What if I can't Figure It Out?

You can always send your Ren-W boards to Dirknerkle -- he'll be glad to check them out and fix whatever needs fixing. If you need to do this, just PM the dirk sometime for his address. Oh, and you'll want to send the XBee modules too, because he'll want to check everything out and test it. You'll get them back in perfect working order and his turnaround is super-fast.