NOTE 11/12/2019: This documentation is now 10-years old and some concepts written in these pages no longer apply. DIGI has new configuration software for the XBee radios and in addition, the XBee firmware has changed, too. To add insult to injury, the new Vixen and XLights sequencers do not support MARK parity, so throughout this documentation, set parity to NONE instead. With the advent of the inexpensive ESP8266 module, wireless control seems to be shifting to Wi-Fi networking, but XBee can still be a viable wireless control option for many DIY'ers. XBee has greater range and is less affected by the communication issues and conflicts that Wi-Fi presents.

Why a Wireless Converter?

Sometimes it's not practical, affordable or maybe even possible to lay physical cable to a particular light controller. For example, trenching beneath your driveway to put a megatree on the other side is a messy, dirty and potentially expensive project. Or let's say you have a pond behind your house and you'd like to put a display on the bank on the other side where there's already an electrical connection for a circulating fountain. Or maybe your neighbor across the street wants you to help him light his house -- trenching beneath a street or suspending cable above it would probably require multiple permits from your local municipality, if it were allowed at all. Maybe you've built a new house and you don't want to leave a window open so all the cables can be routed through it to the outside. Or perhaps you live in an apartment building or rented condo where drilling a hole through the wall isn't even an option. These are just some examples of instances where a wireless connection to your outside Renard controller could very likely be the simplest and most affordable choice. That's why the Ren-W was invented.

NOTES: In the years since this documentation was originally created, the physical Ren-W board has undergone a few revisions. Even so, the construction methodology hasn't changed and the concepts expressed in this WIKI continue to hold true. The antenna configurations of the XBee radios and the configuration setup of the XBee radios with XCTU software have not changed either, and the documents here should stand in good stead for a long time to come.

It is highly suggested that instead of cherrypicking bits of information here and there, the reader should go through everything at least once to get a flavor for what wireless is all about. The Q&A and Troubleshooting sections solve most of the questions that users have had, and the section about antennas covers the various XBee antenna types quite thoroughly. Lastly, the Renard Start Address firmware is absolutely the right tool to accompany wireless operation. The Start Address guide is really a closely-knit companion piece to the Ren-W information.

Ren-W is an inexpensive, compact (3”H x 2.5”W), easy-to-build and configure plug-in wireless adapter for Renard controllers and 595/Grinch systems that use Ren-C (see Ren-C note below). It can also be used with other Renard controllers with very slight modifications to the controllers to tap +5v power for the Ren-W. The Ren-W functions as a transparent serial connection between Renard controllers by converting RS-485 serial data into a digital stream, transmitting it wirelessly to another Ren-W where the digital stream is recombined into serial data and fed into the Renard controller’s normal RJ45 input jack (J2) via short cat5 cable, just like it would have been had the computer been hard-wired directly to the controller. In a typical Renard daisy chain design, channel data that a Renard controller can’t use is passed through and out the controller’s data-out RJ45 jack (J1) as RS-485 data, which is then fed back into the Ren-W, retransmitted to the next Ren-W that’s supposed to receive it, where the digital stream is recombined into serial data, etc. and the process is repeated for as many Ren-W adapters as are in the chain. The Ren-W uses inexpensive yet powerful XBee Pro wireless radio modules to perform the actual wireless transmission/reception functions. The cost to build a single Ren-W board varies from about $27 to $73, depending on the various electronic components chosen.

Ren-W is NOT compatible with DMX systems as DMX requires data speeds upwards of 250kbps. The XBee radio that Ren-W uses for wireless communication cannot support streaming data at that speed; it tops out at around 80kbps, which means that 57,600 baud is the highest communication speed Ren-W can support.

The Ren-W has been successfully tested with the following controllers:

Renard basics and how they relate to Ren-W

To make two (or more) Renard controllers respond identically with the same Vixen commands, Vixen users usually replicate the Vixen channel information that controls one Renard to the corresponding channels that control the other Renards. However, what if you could use a “signal splitter” cable that distributed the same serial signal to multiple controllers, not unlike the concept of a “multi-outlet serial plug strip?” (Splitting an actual, stock serial signal to multiple devices without additional amplification is certainly possible but is generally a discouraged practice – the concept is used here for the illustration.) With such a splitter, each SS controller plugged into the “multi-outlet serial strip” would receive exactly the same channel information at the same time, just as if each was connected directly to the computer’s serial port. In the 32-channel example above however, since the SS8 has only 8 channels, it would be able to use only Vixen channels 1-8 while the SS24 would be able to use channels 1-24, and channels 25-32 would not be used by either controller. The “serial signal splitter” concept can be accomplished wirelessly quite easily; Ren-W refers to this as “Global Broadcasting.”

A version of Renard firmware is available that makes "global broadcasting" possible while still retaining individual channel control. The firmware is an ideal match for the Ren-W and uses a "start address" concept where you set the starting channel number for the controller(s). For more information read the configuration guide: Start Address Configuration Guide

XBee radio modules are essentially addressable wireless serial modems. Ren-W uses XBee radios as a “serial line replacement” to the normal cat5 wiring used to connect Renard controllers. XBees can communicate with one another on a one to one, one to many, or one to all "global broadcast" mode, depending on how each module is configured. The XBee’s configuration flexibility makes it possible to configure a Ren-W network so that multiple Renard controllers respond to the same channels or the network may be configured so that each controller has its own range of channels, which is more in keeping with normal Renard use. XBee radios are designed to accommodate streaming serial data up to 80kbps. Therefore, for best results, set your computer and Renard controllers at 57,600 baud; at 115,200 you may encounter erratic behavior.

An XBee module can require up to 6ms to process received data; normally it's 2-3ms. While this is a very short period of time, consider that the delay is cumulative when multiple Ren-W nodes are configured in repeater mode. For example, in a Ren-W network of 5 nodes, the last SS controller could be nearly 30ms late in reacting to Vixen control commands. This may not be very perceptible in some situations but in others, it could become quite noticeable and the delay should be factored into the general design of a Ren-W network, and possibly during the light sequencing design as well. Note that in global broadcast mode, the delay is not cumulative as all receiving Ren-Ws receive the Vixen commands simultaneously and each unit would only be 2-3ms (or less) late. In actual testing, whatever delay may exist in global broadcast mode is virtually undetectable.

Selecting the right XBee Modules - Which Do I Need?

XBee RF modules come in a standard and a "pro" version, and they operate in the 2.4ghz frequency spectrum. The modules do not interfere with wireless computer networks that also operate at 2.4ghz. The lower-powered standard version is said to have a line-of-sight transmission range upwards of 300 feet while the more powerful “pro” version is only ¼” larger and has a line-of-sight range upwards of a mile. In actual use, the distances are quite probably less than the stated specifications, especially considering the modules will likely be housed inside a protective non-metallic box of some kind. Mounting inside a metal box is not advised as it will severely hamper effective transmission distance. 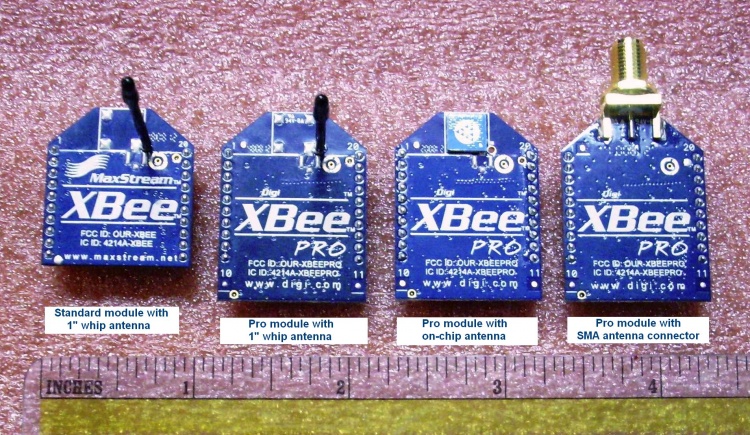 The antenna type on an XBee module can make a difference, too. (Be sure to read the pages about antennas!) The short, 1" wire antenna will provide better coverage than the flat, on-chip antenna. A version is also available with an antenna connector, presumably for a external directional antenna and even greater range potential. There is no significant price difference for the different antenna types and all are available for both the standard and pro versions. Suggestion: If using the Ren-W in normal repeater mode, consider using the lower powered, lesser expensive standard module for receiving and the more powerful pro module for transmitting, depending, of course, on the transmission distance needed. A special version of the Ren-W board is available for those who want to try an external antenna, using XBee modules that have the SMA antenna connector. Because of the length of this connector, the board has been reengineered so that the XBee modules point downward:

Other than the power difference and slightly larger physical size of the “pro” version, the modules are interchangeable, pin-for-pin identical, and the configuration settings are identical as well. However, consider that the “pro” version has 10x the transmitting power of its lower-powered sibling, and it has a more sensitive receiver, too. These two factors make it the XBee module of choice for the Ren-W.

It’s important to remember that Ren-W was created to be more of an extension to an existing, wired system than as a complete replacement of it. Wireless connections are never as secure as hard-wired connections are and periodically, data drop-outs can and likely will occur because wireless data transfer is inherently much more complex. But used in the right situations, Ren-W can be an effective solution to a wiring logistics problem.

Ren-C Note: When Ren-W is connected to a Ren-C's RS-IN jack, it is necessary to install a balun on the cable between the Ren-W and the Ren-C. The balun will reduce the EMI interference that the XBee module creates in the cat5 wire. Without the balun, the Ren-C will likely experience framing errors and no communication with the Ren-W. (Radio Shack part# 273-0069)